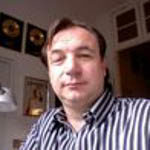 Xavier Collin alias “Bill” comes from a booking agency and management. In 10 years he booked over 800  shows all over the world. Today he manages WTPL, a publishing company. WTPL was founded in 1991 by the English band called “Barking Dogs”. Since 2003, Bill expanded his catalog. He had a big success with the Canadian Artist called “K.Maro” in 2004 with the hit “Femme Like U”, N°1 in 17 country, platinum & gold album in many country. Since 2005, He develops a label part call “Booster”. He build some other companies like “Regain” a musical library (music for cinema & TV), a publishing company in Canada, and at the end of the year a publishing company in Germany.