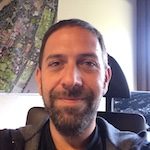 Tamas Kadar was born 1975 in Budapest, studied in Germany and Hungary and has a graduate in communication and media. He worked in the advertising and media business for 17 years and founded his own media and advertising agency 1996. He was also founder and owner of an alternative Budapest radio station (radiocafé – 2000-2007) and CEO of a countrywide commercial radio station (NeoFM – 2009-2010). He then switched to Sziget Cultural Management as CEO and is responsible for all the 7 festivals of the company. Among them, Sziget Festival was elected as Best Major Festival in Europe in 2011 and 2014.