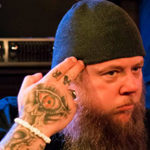 for his own company Razorline Music alongside being part of the tight knit team that brings you the UK Bloodstock Open Air Festival. Yet many people best know Simon for fronting the metal band Beholder, hailed as the “Standard Bearers of Britain’s Traditional Metal Renaissance” and with this he champions rock and metal across the globe.  This passion for helping bands is bolstered in his role as chief organiser at Bloodstock through the Metal 2 The Masses initiative, where he works 24/7 to entice and nurture developing live and recording artists – not only to compete against the influx of entertainment offerings outside of music, but also to be part of developing the bands of tomorrow.