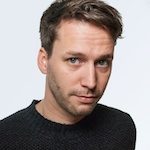 Robert Swarts, co-owner of Friendly Fire and festival director of Best Kept Secret. Friendly Fire is based in Amsterdam, The Netherlands and operating since 2009. The company works on artist management, bookings, concert promotion and is a festival organiser of, amongst other, the Best Kept Secret festival. Best Kept Secret, a three-day event,  is a 17,500 capacity (per day) alternative music festival in which big names are alternated with many new discoveries from indie, folk, hip-hop and electronics spread over 85 performances on 5 stages.