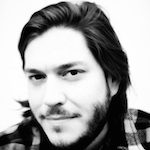 Born in the back seat of a Cadillac with a drum machine in one hand and an abacus in the other, Riyadh Drebika grew his bones strong on a steady diet of algebra, granular synthesis and Gang Starr. After being a producer for Singing Serpent (CA/NY) he went over to Warner/Chappell PM as their Director of Licensing for TV, Film and Advertising (NY).  He broke free of North America by the way of recruitment to Amsterdam, taking on the Senior Music Producer position with Sizzer Amsterdam. While on this crazy bi-coastal, now global, roller coaster he has been lucky enough to work with some important companies like Audi, BMW, Diesel, ESPN, NBC, HBO, Showtime, Sony, Disney, Visa, Target, Ebay, Microsoft, NFL, NASCAR, AT&T, LG, T-Mobile, Chevy, Turner, and more.