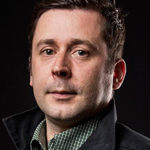 Laurent Sabatier cut his teeth in North of France’s local community organisations. He started his carreer at “La Cave aux Poètes” and “Transculturelles Festival” in Roubaix. Later on, he was in charge of “Lille 2004 – Capitale européenne de la Culture” projects at La Condition Publique in Roubaix. In 2006, he set up his own business and took back the Tri Postal’s programming in Lille where he worked on exhibitions and concerts related to pop- and counterculture. One year later, he joined the team of Parisian concert venue Nouveau Casino, taking control of its management shortly thereafter. At Nouveau Casino, he currently continues to work hand in hand with producers, taking a particular care to accompany emerging talents from diverse horizons, going from electronic music to pop music, over metal to hip hop. Since 2011, he is also administrator at Prodiss, the French national employers’ organisation for promoters, festivals and venues in the field of popular music, musicals and stand-up comedy. His latest project has been the launching of a new magazine in 2012 called “Roadie”, which presents artists on tour.