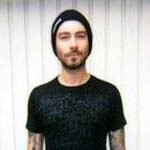 Joe Koener is one of the founding members of Eternal Tango and active in it since 2002. Eternal Tango has played over 400 shows, from little DIY bar shows to international Touring in over 10 European countries. Since 2008 Joe is also one of the Managing directors of the Golden Fox L.L.C. A Structure that the Band decided to create during the release of their last record “Welcome to the Golden City” to make all the their transactions possible on a legal scale. All that Eternal Tango had ever signed was a publishing contract, DIY and to be as free as the Wind, had been their philosophy, until this day! But in nearly 10 years of existence views can change.