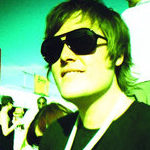 Jamie Wade has been an agent at X-ray touring for almost 4 years now, representing acts like Adam Green, Courtney Barnett, The Pizza Underground and Bo Ningen all over the world excluding North America. X-ray touring represents established artists such as Coldplay, Robbie Williams, Blur, Nick Cave and the Bad Seeds (to name but a few) and works with emerging talents to help them build long term live careers. Jamie’s background in operations and production always adds an extra edge to his way of work. His long term planning skills never compromise on creativity and love for the artists. No shortcuts taken, he is with them for the long run.