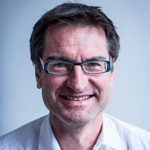 Dirk De Clippeleir started his career in the music industry in 1989 as marketing manager and then managing director of EMI Belgium. At Universal he was managing director until 2007 and International Director of New Technologies from 2002 until 2005. He made a radical career switch in 2007 when he founded his own coaching company focusing on management coaching. The music lured him back in 2011 when he became managing director of Belgium’s iconic concert hall Ancienne Belgique.