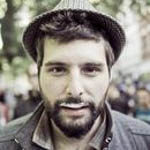 Born in Luxemburg, David Moreira began his musical education with studying voice at the “Conservatoire de Musique” de la Ville de Luxembourg. 2008 he continued his studies at the Music Academy International Nancy and received a degree as a professional musician. 2006 he joined the Band Eternal Tango, where he is still the Leadsinger. With Eternal Tango he played over 300 shows. From little DIY bar shows to international touring in over 10 European countries.