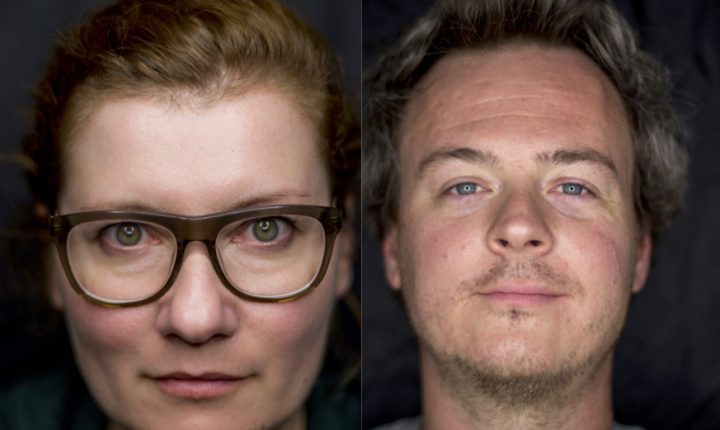 Karolina Markiewicz and Pascal Piron work as a duo in different artistic fields. Their collaborative work creates links between film, visual arts and theater. At the center is the individual person as part of a human community, oscillating between resignation and hope.

Karolina Markiewicz studied political science, philosophy and theatre and works as a film and theatre director. Pascal Piron studied visual arts and works as an artist and film director. Both work as teachers. Their cooperation started in 2013 with the documentary video installation Les Formidables (2014), which tells the story of five young migrants in Luxembourg. In 2014, they also founded the video blog kulturstruktur.com.

In 2015 they worked on the project Philoktet, which includes the homonymous play by Heiner Müller and an exhibition relating the Greek tragedy to Robert Oppenheimer and the atomic bomb. As part of the preparations for this work, Karolina Markiewicz participated at a workshop held by Romeo Castellucci organised during the Theatre Biennale in Venice in 2015.

At the same time they released their second documentary Mos Stellarium, produced by Tarantula and supported by the Film Fund Luxembourg. The documentary (52 minutes) follows six young refugees in Luxembourg. Part of this project is the installation of Mos Stellarium, which offers different parts of the movie simultaneously, thus giving a non- linear reading of the film. Karolina and Pascal have represented Liechtenstein at the 56th Venice Art Biennale in 2015 with this video installation. The documentary premiered in Luxembourg in 2015 and was shown at different festivals around the world.

The most recent works are a series of short films entitled Side-Effects of Reality, shown in a solo exhibition at Casino Luxembourg – Forum d’art contemporain in Luxembourg (2016), at Rencontres Internationales in Paris (2017) and Argos Centre for Art and Media in Brussels (2017) and Galerie Dominique Lang in Dudelange (solo exhibition). They explore history in a poetic way, creating myths of the present by transforming the past of certain locations into a metaphorical narrative. Upcoming exhibitions include Luxembourg (late 2017), Berlin (late 2017) and Taipei (2018).

Karolina and Pascal are currently working new episodes of the Side-Effects of Reality series, developing Human Resources – a Virtual Reality series (fiction) with a_bahn and preparing a documentary. Always exploring new forms of narration they look forward to work with musicians on video projects.

Past Events with Karolina Markiewicz