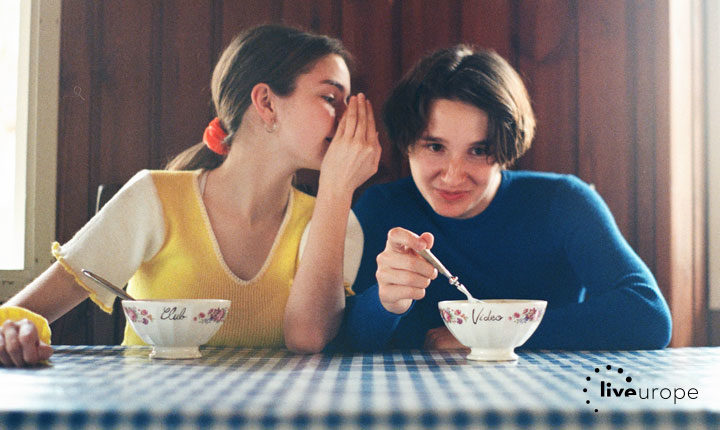 Boy meets girl. Eternal youth, teenage love, insolent freshness of a pop duo just born. On the black screen of our sleepless nights, flashes the neon sign of an old video
club. Images, forever imprinted on the retina, of a travelling in “Bad Blood” (“Mauvais Sang”), a scene from “Full Moon in Paris” (“Nuits de la pleine lune”) or from a Truffaut movie. A lost innocence that Videoclub, a young duo from Nantes (France), captures with the magnificent purity of their seventeen years of age. From stolen kisses to restrained tender gestures, raising hell together, and their powerful love – authentic – resembles an auteur film. This spontaneous grace radiates their first music video, “Amour plastique”, which was watched more than 10 million times on YouTube and reposted by a Mexican actor from a Netflix series, making it viral. « Aime-moi jusqu’à ce que les roses fanent/ Que nos âmes sombrent dans les limbes profondes » (« Love me until the roses fade/ And our souls sink into deep limbo »), says this bouncing piece of synthetic pop with its heady charm – when Fauve meets Elli & Jacno on a beach in Nantes. A striking contrast between the absolute seriousness of their oaths and the lightness of their chases, children’s games, lovers’ teasing on screen.

Yet, Videoclub was not born from the imagination of writers of series in the likes of “The End of the Fucking world” – the duo/couple actually exists. Adèle Castillon is
17, she is a high school student and actress (two movies already), and she’s been expressing her ideas, opinions and puns on her YouTube channel (600 000 followers) since she was 13. Matthieu Reynaud is 17, he’s a high a school student as well, and he composes and arranges the songs. Their story is a simple one : they met through a mutual friend in high school, fell in love, decided to make music. Along with Esteban Capron, a friend, they wrote the lyrics to “Amour plastique”.

Julie Reynaud, Matthieu’s sister, directed their first two music videos. Matthieu’s father manages relationships with labels, many of which have been wanting to sign them, in vain. Videoclub wants to keep it homemade, independent, familial. They played their first show recently: Adele singing and playing keyboards, Matthew singing as well and playing guitar, pad, loops and keyboards. For now, their setlist includes the songs of their first EP along with a cover of XXXTentacion.

And so, on a fucked-up planet, in a society that struggles every day a bit more, a young duo manages to restore hope. Released in December 2018 and gathering more than four
millions views to date on YouTube, the track “Roi” explores the feeling of love once again, this time on a more serious and melancolic note, like an optimistic Fauve or a romantic Odezenne would do. As if they had suddenly realized that they are the guardians of a feeling that is precious and much bigger than they are. “We receive a lot of messages from people from our generation, sometimes extreme ones”, explains Adèle. “Very much preoccupied by love, but powerless, sometimes, in finding it or keeping it, they see us as the ideal couple. They’re sometimes more interested in us than in our music.” However, Videoclub has a lot to say – and not only about their couple – and they’re about to tell the world. Because one thing is certain: they have a bright future ahead.