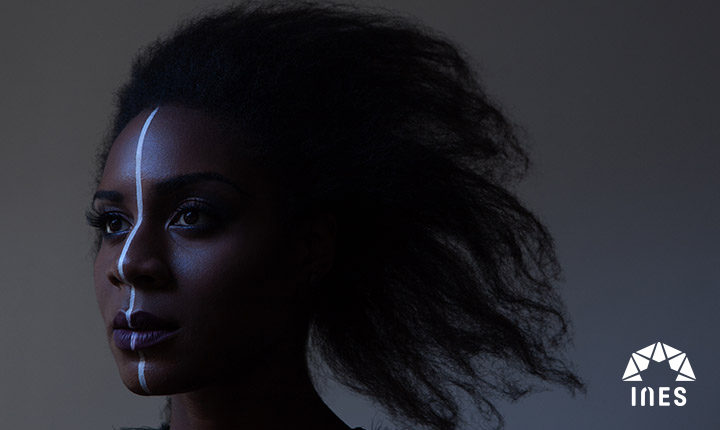 Alongside writing & featuring on albums for the global icon Goldie MBE & DJ DirtyFreud (Ninja Tune) she was selected “One to Watch” by both Ticketmaster & BBC 6 Music, and is also an INES Talent 2019 artist.

Previously talent scouted by Grammy winning producer Naughty Boy (Beyonce, Sam Smith) & newly backed by indie label Absent Mind Records, many have been enchanted by her sublime and unique sonic world. Merging other worldly textures & intimate sensual vocals, she nails that sweet spot of industrial yet ethereal; “A voice that will make the hairs on the back of your neck stand up” [BBC Radio].
Her latest single ‘Without Prejudice’ was playlisted Apple Music ‘Best of The Week’ but her own breed of dark electronica had already been garnering key tastemakers’ praise incl. BBC 6 Music, Clash Magazine, Q, Wonderland, BBC Introducing, Indie Shuffle, Afropunk, and the MOBOs Mag amongst many others.

Recognised as much for her spellbinding music as for her mesmerising stage presence in outfits she creates herself by hand; merging fashion, dance & sonics in every live performance. A prolific songwriter outside of her solo project, she’s had successes in the UK Club Charts, rising to #13 in summer of ‘17 with ‘Making Shapes’.
Adding to that an outspoken Ambassador for UK Music & The Featured Artists’ Coalition, she is a force of nature.