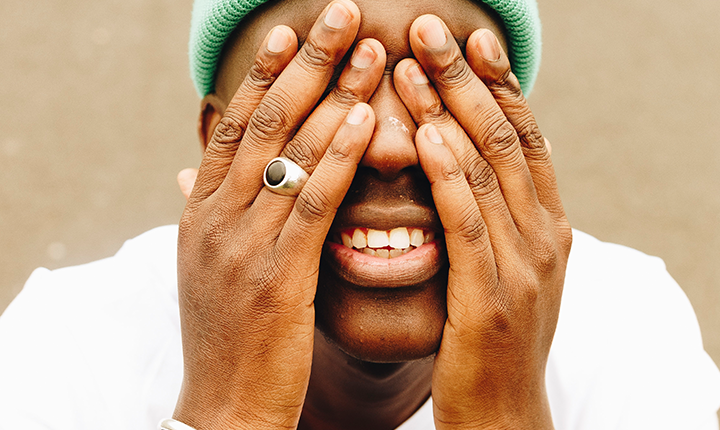 Barney Artist is the laid-back, seriously woke rap maestro that demands your attention. The 26-year-old east Londoner fuses 90s era boom bap hip-hop with jazz for a refreshing sound harkening back to legends such as A Tribe Called Quest and The Roots, and taking influence from prolific UK artists including Kano and Ghostpoet. His sprawling content, consisting of love, loss and religion, is incredibly see through and relatable, as he guides the listener through his multifaceted life. Set to release his debut album later this year, the follow up to 2014 mixtape Bespoke and 2016’s Painting Sounds, he is laying down yet more bricks of his life, mapping out an overall journey of self-discovery and growth. “I’m really proud of this album,” Barney says, “because I know that’s what I stand for and how I want people to feel about what I say, and now I have a platform to say it. The ability to be able to do that is important.”

The album is the culmination of a life-long journey for Barney. Growing up in Forest Gate, East London in a single parent household, he was immersed in the church by his mother but also “taught to be tough” in an area where many had nothing but protected it strongly. He found his musical calling as a late teenager, substituting a passion for acting when his best friend, fellow artist Alfa Mist, introduced him to jazz music. “[Alfa] teaches himself the piano at 17,” he explains, “and I was doing really shit grime at the time, then I realised the beats that he was making were jazz influenced, so I started my bars to that sound. I was really into entertainment and I just worked really hard on the music before listening to any hip-hop – I did it the wrong way around. I started from Tribe, Kanye, Lupe, finding who influenced who and going back in time. You learn so much that way and find out so many cool things.”

He released his first songs in 2013 and hasn’t looked back, scoring arguably his biggest release in 2014 with ‘Space’. Resultingly, his music has garnered over two million streams on Soundcloud, three million on Spotify and over 100,000 on YouTube, and support from the likes of NME, i-D, Clash, Complex and GRM Daily and a guest spot on BBC 1Xtra documentary The Skin I’m In. He is also a strong presence on stage, having just concluded a UK wide support tour with Alfa Mist and is set to rip up the festival stages of the Ghostnotes, Love Supreme Jazz Festival, World Island Barn on the Farm later this year.

Barney is deeply confessional; tackling everything from bad breakups to his relationship with God via taking care of his family, his material makes the mundane sound exciting in every sense – “I want it to feel like we have a connection and my fans feel that way,” he says. Barney has spent the last year crafting his debut album, which is set to feature close friends Tom Misch, Jordan Rakei and Alfa Mist as well as Emmavie, Dornik and Geroge The Poet. “The album is about my relationship with women and how having two little sisters, (Inaya 5 & Illana 11) has shaped my views on women,” he explains. “My journey to the realisation on how hypocritical I, and men can be with how we treat our mothers, daughters and sisters with ‘respect’ and want to protect and love them but might not be as quick to do so with other people’s mothers, daughters and sisters. My fears on how the person they fall in love will treat them and will they respect them like the queens they are. This record is about love, life and family”.

Working closely with fellow artists and friends Alfa Mist, Jordan Rakei and Tom Misch, Barney is part of a vibrant London scene placing musicality at the forefront and this is aligned with his aims to be an eternal presence in UK hip-hop rather than a fleeting celebrity experiencing their 15 minutes of fame. “I want people to say I was being honest with everything I said, and the music was good quality,” he concludes. “Those are the two things I pride myself on, I want you to have listened to any of my releases and seen the journey and if you play them altogether you’re seeing a never-ending film, and I’m dropping things that are connecting through.” With a strong work-ethic, impenetrable ethos and an album on the way, Barney Artist is set to shine brighter than ever before.