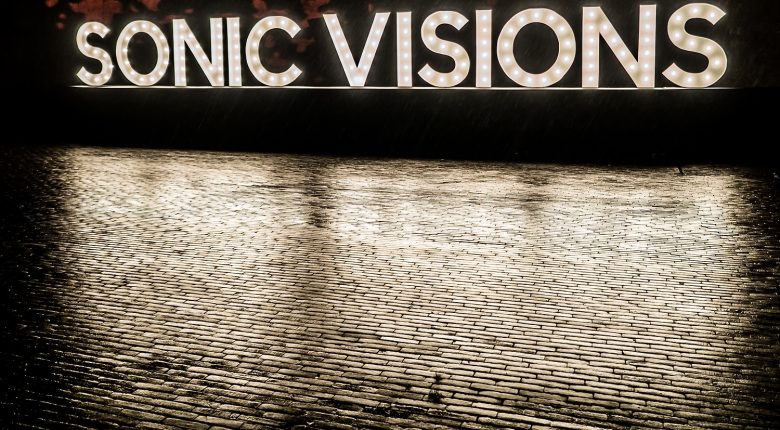 Sonic Visions Music Conference & Festival
Sonic Visions celebrated its 10th anniversary with a successful move to the new festival site at the blast furnaces of Esch – Belval. Within the magnificent setting dominated by the impressive architecture of Luxembourg’s industrial past, three days entirely dedicated to music charmed the public: a mix of local and international artists and industry professionals attending the conference, a festival crowd longing to see their favourite bands and ready to discover plenty of new music, as well as people enjoying delicious food at the Sonic Visions Food Market or partying at Thursday’s After Work powered by Agora. The unique atmosphere of Belval’s ancient steel factory, illuminated at night by the marvellous decoration made by the festival “Nuits des Lampions de Wiltz”, perfectly matched the sound and vibe of the eclectic line-up of the three festival stages.

The Music Conference
Sonic Visions music conference saw more than 500 delegates coming from all over Europe to attend three days of panels, workshops, networking events and inspiring keynotes and connect with Luxembourg’s music and creative scene. With more than 100 speakers from 20 different countries Sonic Visions again proofed to be the leading event for the music scene in Luxembourg and the Greater Region, and has become a confirmed rendez-vous in the circuit of the European music conferences and showcase festivals.

Three important European projects in which Rockhal and Sonic Visions participate presented themselves at the conference:

The first conference day with its panels and many meeting opportunities put a focus on music in the Greater Region (Luxembourg and the surrounding parts for Belgium, France and Germany) thus establishing, maintaining and growing the networks between these important European music markets.

The Second day started with the opening speech of Luxembourg’s Secretary of State for Culture, Guy Arendt who underlined the importance of Sonic Visions as an event that creates synergies on a local, regional and international scale for the national music scene. It was followed by a multitude of panels, meetings and workshops like e.g. the panel discussing the importance of music journalism in the age of YouTube and Instagram and an inspiring debate on the value of data and the role of collecting societies in the digital age that was presented by Sacem Luxembourg.

Highlights of the day were the two keynotes by:

Saturday covered a wide range of topics with hands-on workshops, such as how to set up your first business in the creative industries in cooperation with the Chamber of Commerce of Luxembourg. Experts from Austria, Belgium, Iceland and the Faroer Islands gave insights the current situation and challenges for the music industries of smaller countries. “Meet the filmmakers” brought together the conference delegates with professionals from Luxembourg’s lively film industry.

Over the past years Sonic Visions has grown continuously and, as it’s all about “Tomorrow’s Music Experience”, this conference connects music, technology and the creative industries, fostering creativity and entrepreneurship.

An enthusiastic Festival Line-Up and Video Clip Awards
No fewer than 26 handpicked ‘coup de coeurs’ and upcoming artists took the stage during the Sonic Visions Festival. Bender & Schilling as well as a profound performance of Bartleby Delicate opened the festival on Thursday. An impressive show of Edsun enchanted an enthusiastic festival crowd on the Codex Stage, followed by the long-awaited Romeo Elvis & Le Motel and Riles. The Highlights of the Saturday Line-Up were the performances of Them Lights, Drops & Points, the video release of Tuys as well as J.Bernardt and Her.

The 5th edition of the VCA’s, the Video Clip Awards rewarded the best music videos made in Luxembourg. As an integral part of the artist’s identity, self-expression and his creative universe, video clips are a fundamental link between the artists and their fans as well as an important source of revenue. Among the more than 50 applications, the jury and the public rewarded the most creative and innovative local music videos. Please check out all the winners HERE!

This year’s edition was also the occasion to announce that Luxembourg based artist Them Lights has been selected for the first Luxembourg Film Fund grant for music videos initiated by Film Fund, Rockhal and Music:LX.

FIRST NAMES OF LINE-UP WILL BE REVEALED ON WEDNESDAY!

We're getting ready for this year's Sonic Visions Festival and the line-up is nearly set!…

It's time to discover new music! For this we're very happy to announce Moses Sumney,…